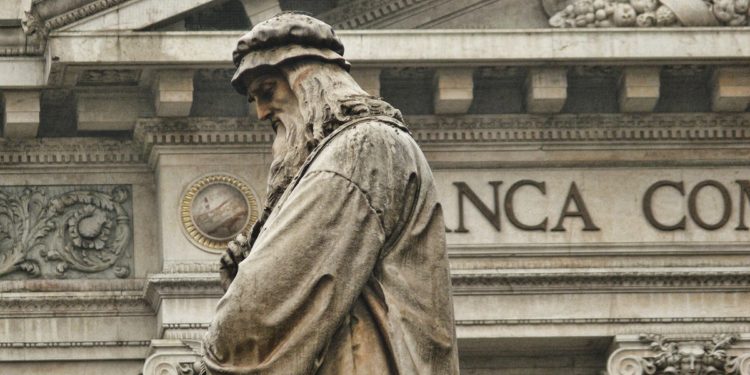 More than 500 years ago, Leonardo da Vinci was watching air bubbles float up through water—as you do when you’re a Renaissance-era polymath—when he noticed that some bubbles inexplicably started spiraling or zigzagging instead of making a straight ascent to the surface.

For centuries, nobody has offered a satisfying explanation for this weird periodic deviation in the motion of some bubbles through water, which has been called “Leonardo’s paradox.”

Now, a pair of scientists think they may have finally solved the longstanding riddle by developing new simulations that match high-precision measurements of the effect, according to a study published on Tuesday in Proceedings of the National Academy of Sciences.

The results suggest that bubbles can reach a critical radius that pushes them into new and unstable paths due to interactions between the flow of water around them and the subtle deformations of their shapes.

“The motion of bubbles in water plays a central role for a wide range of natural phenomena, from the chemical industry to the environment,” said authors Miguel Herrada and Jens Eggers, who are fluid physics researchers at the University of Seville and the University of Bristol respectively, in the study. “The buoyant rise of a single bubble serves as a much-studied paradigm, both experimentally and theoretically.”

“Yet, in spite of these efforts, and in spite of the ready availability of enormous computing power, it has not been possible to reconcile experiments with numerical simulations of the full hydrodynamic equations for a deformable air bubble in water,” the team continued. “This is true in particular for the intriguing observation, made already by Leonardo da Vinci, that sufficiently large air bubbles perform a periodic motion, instead of rising along a straight line.”

Indeed, bubbles are so ubiquitous in our daily lives that it can be easy to forget that they are dynamically complicated and often tricky to experimentally study. Rising air bubbles in water are influenced by a host of intersecting forces—such as fluid viscosity, surface friction, and any surrounding contaminants—that contort the shapes of the bubbles and shift the dynamics of the water flowing around them.

What da Vinci noted, and other scientists have since confirmed, is that air bubbles with a spherical radius that is much smaller than a millimeter tend to follow a straightforward upward path through water, whereas larger bubbles develop a wobble that results in periodic spiral or zigzag trajectories.

Herrada and Eggers used the Navier–Stokes equations, which are a mathematical framework for describing the motion of viscous fluids, to simulate the complex interplay between the air bubbles and their watery medium. The team were able to pinpoint the spherical radius that triggers this tilt—0.926 millimeters, which is about the size of a pencil tip—and describe the possible mechanism behind the squiggly motion.

A bubble that has exceeded the critical radius becomes more unstable, producing a tilt that changes the curvature of the bubble. The shift in curvature increases the velocity of water around the surface of the bubble, which kicks off the wobble motion. The bubble then returns to its original position due to the pressure imbalance created by the deformations in its curved shape, and repeats the process on a periodic cycle.

In addition to resolving a 500-year-old paradox, the new study could shed light on a host of other questions about the mercurial behavior of bubbles, and other objects that defy easy categorization.

“While it was previously believed that the bubble’s wake becomes unstable, we now demonstrate a new mechanism, based on the interplay between flow and bubble deformation,” Herrada and Eggers concluded in the study. “This opens the door to the study of small contaminations, present in most practical settings, which emulate a particle somewhere in between a solid and a gas.”

The post A 500-Year-Old ‘Paradox’ by Leonardo da Vinci Has Finally Been Solved, Study Says appeared first on VICE.

A 500-year-old ‘paradox’ by Leonardo da Vinci has finally been solved, study says

X
Scientists determine best place to stand in your house when a nuke hits…Science and HealthNuclear bombs are the most devastating weapon on the planet. The blast from the explosion generated by Russia’s “Satan II” nuclear missile would destr…