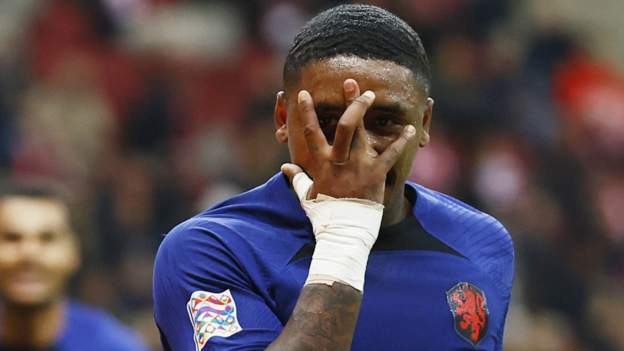 The Netherlands remain in control of Nations League Group A4 after defeating Poland in their penultimate match.

Cody Gakpo met Denzel Dumfries’ low ball into the box to put the visitors ahead after 13 minutes in Warsaw.

Steven Bergwijn secured victory for Louis van Gaal’s unbeaten side with a curling finish on the hour mark.

The Netherlands must avoid defeat against second-placed Belgium in their final fixture to qualify for next summer’s Nations League finals.

Belgium remain three points behind the Netherlands after they beat Wales 2-1 on Thursday to maintain their hopes of topping the group.

Van Gaal’s side have won four of their five group games and defeated Belgium 4-1 when the sides met in June.

Back to Top
Close
X
Hertha's Boetius diagnosed with testicular tumour…HeadlinesBBC Sports Hertha Berlin winger Jean-Paul Boetius will be sidelined after a tumour was found in one of his testicles.The Dutchman, 28 was diagnos…

Netherlands win in Poland to close on finals