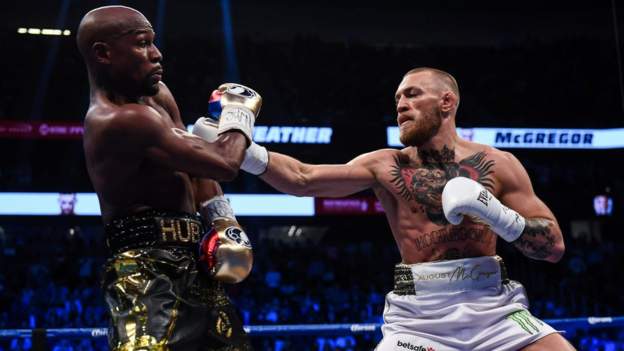 Mayweather, 45, stopped McGregor in the 10th round of the final fight of his professional career in 2017.

Having competed in several exhibitions since retiring, Mayweather says he is in talks to fight McGregor again.

“We don’t know if it’s going to be an exhibition or a real fight,” he told the Daily Mail. “I would prefer an exhibition.”

McGregor later posted a picture on Instagram from their previous fight with the caption “#notinterested”.

Mayweather suggested Allegiant Stadium, home to the NFL’s Las Vegas Raiders, as a potential venue for his rematch with McGregor.

“They already talked to me about my number that I’m going to receive,” Floyd told TMZ, adding, “9 figures.”

Back to Top
Close
X
Suspended Suns owner wants to sell NBA clubHeadlinesBBC Sports The Phoenix Suns owner Robert Sarver has announced his intention to sell the NBA club.Sarver was fined $10m and suspended from th…

Mayweather wants to fight McGregor in 2023

X
'Maguire isn't Rio Ferdinand but he's a good player' – Chi…HeadlinesGiorgio Chiellini has leapt to the defence of Harry Maguire, claiming the Manchester United captain is a “good player” with an unfortunate price tag.W…