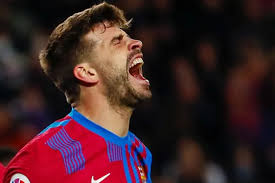 Barcelona will have to terminate the contract of Gerard Pique if the defender fails to play 35 per cent of matches this season.

The Spanish centre-back has a contract at the Nou Camp until 2024, but Barca are keen to see him leave because is the highest earner in the squad, despite becoming a fringe player under boss Xavi.

According to Mundo Deportivo, Barcelona will have the option of terminating Pique’s contract one year early if he features in less than 35 per cent of games this term.

Taking into account league fixtures, domestic cup ties and European matches, the club are likely to play between 50 to 55 games this season – meaning Pique can play no more than approximately 19 times if Barca want to see him leave next summer.

So far, the 35-year-old has featured just once in LaLiga – playing the full 90 minutes against Cadiz – and came on as a half-time substitute against Viktoria Plzen in the Champions League…

X
Hertha's Boetius diagnosed with testicular tumour…HeadlinesBBC Sports Hertha Berlin winger Jean-Paul Boetius will be sidelined after a tumour was found in one of his testicles.The Dutchman, 28 was diagnos…