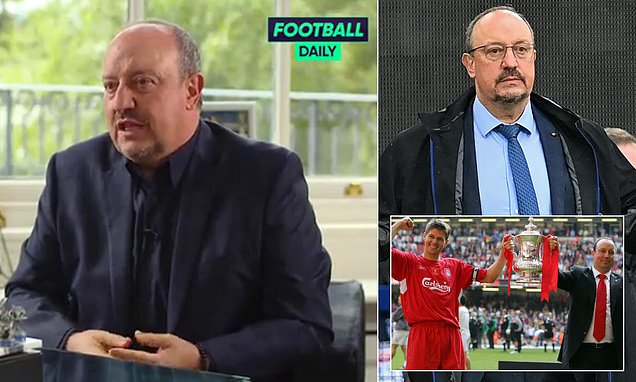 ‘I couldn’t do it because I was RED’: Rafael Benitez admits his ties to Liverpool made it extremely difficult to succeed with their fierce rivals Everton as Spaniard opens up on his struggles at Goodison Park

The Spaniard, 62, was Reds manager for six years, winning the Champions League in 2005, but took over at Goodison Park in June 2021 amid much opposition from fans.

Rafael Benitez has admitted his Everton tenure was doomed from the start due to his ties to their bitter local rivals Liverpool.

The Spaniard, 62, was Reds manager for six years, winning the Champions League in 2005, but took over at Goodison Park in June 2021 amid much opposition from fans, who put up a banner near his home saying ‘We know where you live. Don’t sign’.

Benitez, sacked in January after nine defeats in 13 games, opened up on the difficulties making things work – telling Football Daily he couldn’t make the changes he wanted due to potential accusations he was changing things too quickly.

‘You have to analyse the context. When they came with the offer, I knew (fans) would say ‘you were at Liverpool’ and it would be a problem. I have a lot of friends that are Blues, they knew I would give everything and try to do my best to improve things.

‘I knew it could be difficult but because I was Red, maybe I couldn’t make some decisions that were very clear for us at the beginning.’

Back to Top
Close
X
Chelsea to swoop for Barcelona defender in 2023 in move that spells bad news for £45m Lampard signin…RifsTeam talkChelsea are reportedly looking to sign Barcelona left-back Alejandro Balde in the summer of 2023, which is likely to spell bad news for Ben C…

Rafa Benitez: Liverpool ties made it tough to succeed with Everton