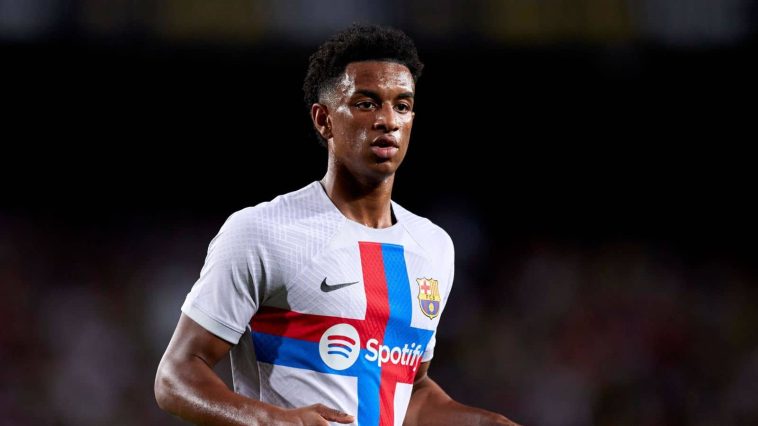 Chelsea are reportedly looking to sign Barcelona left-back Alejandro Balde in the summer of 2023, which is likely to spell bad news for Ben Chilwell.

Balde has so far struggled to break into the Barca starting line-up under Xavi, with his chances hit harder after the Catalan giants landed Marcos Alonso from Chelsea to compete with Jordi Alba in the position.

A move is currently considered the best for the player’s overall development. However, it’s not clear if it will be a loan move or a permanent one.

Indeed, Balde is still only 18 but is considered one of the better young defenders in European football.

To that end, Fichajes reports that Chelsea are considering making a £13million bid to secure his signature next summer.

Links to Balde are not all that surprising, considering new owner Todd Boehly’s stance on signing younger players.

Experienced stars Kalidou Koulibaly, Pierre-Emerick Aubameyang and Raheem Sterling were added to the squad over the summer. But that was in addition to the likes of Wesley Fofana, 21, Marc Cucurella, 24, and Carney Chukwuemeka, 18.

The Blues also brought in a host of players to boost their academy. They included youngsters Omari Hutchinson and Zak Sturge, while Chelsea also missed out on Southampton starlet Romeo Lavia.

Boehly also turned to Graham Potter as the man to replace Thomas Tuchel. And the hope is, given Potter’s ability to improve younger players at Brighton, the same scenario will unfold at Stamford Bridge.

But that could all spell bad news for one Blues star, namely Chilwell.

Chilwell could end up a Chelsea luxury

Chelsea spent £45million to sign the former Leicester man in 2020 when Frank Lampard was still boss.

However, injury issues often saw the England man on the sidelines, while Tuchel often preferred Alonso in the left-back role…

X
Rafa Benitez: Liverpool ties made it tough to succeed with Everton…RifsBy Max Mathews 'I couldn't do it because I was RED': Rafael Benitez admits his ties to Liverpool made it extremely difficult to succeed with thei…