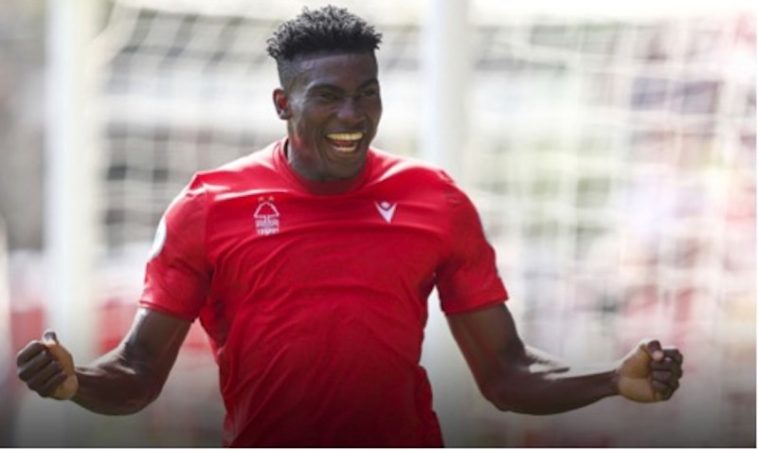 After his exploits with the Golden Eaglets of Nigeria at the 2013 U-17 World Cup, he was seen as one of the youngest talents in world football, which led to scrambling for his signature by big European clubs. In 2015, Taiwo Adeniyi joined Liverpool and had a dream of making an impact with the Merseyside giant, but it was not to be as he never got the chance to lace his boots for the Anfield side for once in a competitive game.

After seven-loan spells to various European clubs, he was finally sold to German Bundesliga side-Union Berlin, and it was there he finally found a home.

With his exploit at Union Berlin where he last season scored 15 goals, the sixth in the German top flight that helped The Iron Ones secure a Europa League ticket.

Awoyini indeed warmed himself into the heart of Berlin fans and was seen as their Cult Hero. Rather than compliment on that, the Nigeria striker decide to move to the Premier League-his longtime ambition.

However, at Nottingham Forest he has just been used sparingly. In Forest’s last two matches against Manchester City and Bournemouth respectively he was introduced into the game with less than two matches to the end on both occasions, unlike in Berlin where he was a regular starter except for injury.

While Awoniyi’s Nottingham Forest is placed 19th on the Premier League log, Union Berlin, a club where he was worshiped and adored by the fans are currently topping the Bundesliga table.

Union Berlin went top of the German Bundesliga for the first in their history by edging past Cologne.

Unbeaten Union secured top spot after Freiberg were held to a goalless draw by Borussia Monchengladbach.

But it is Urs Fischer’s side who led the table after six games, ahead of teams such as champions Bayern Munich, who are third and Borussia Dortmund in fifth place. Union are also competing in the Europa League after missing out on Champions League qualification by a single point last season.

When he scored his 10th Bundesliga goal last season Union Berlin fans hailed the 24-year-old the best in the world.

“He is the best in the world,” one fan told Soccernet.ng after the game.

Another group of fans sang a special song of praise in honour of the player.

However, his dream has always been to play in the Premier League since being signed by Liverpool but getting a place in the star-studded Reds’ side and also securing a work permit have been an issue culminating to going on a seven-loan spell to various European clubs before finally being sold to German Bundesliga side-Union Berlin.

However, succour finally came the way of the Super Eagles striker to achieve his dream with newly promoted side, Nottingham Forrest ready to cough out a club record signing of £17.5m for the signature of the Nigerian international.

…Forest head coach Steve Cooper said: “There’s been a lot of interest in Taiwo from other Premier League clubs and other clubs across Europe, so we’re delighted that he’s chosen Nottingham Forest. “Our recruitment and coaching teams have been monitoring his progress closely over the last few months.

“He’s a player who we really believe in and we look forward to him going on to fulfil his potential and become a top Premier League striker with Nottingham Forest.”

“I’m very excited to be here at Nottingham Forest,” he told the club’s website.

“It’s always been my dream to play in the Premier League and, having spoken to Steve Cooper about our ambitions and looking at Forest with its great history, it’s a club that I want to be part of.”

With just a goal in 245 minutes in the Premier League and Nottingham Forest placed 19th on the log, a campaign in the Sky Bet Championship indeed looms for Awoniyi.

Taiwo Awoniyi: Lost in the Forest?

X
If the NBA is serious about living its values, then Robert Sarver has to go…OP-EDDonald Sterling was banned from the NBA for life. What the Suns’ Robert Sarver did was worse, but earned him a slap on the wrist. The league simply mu…