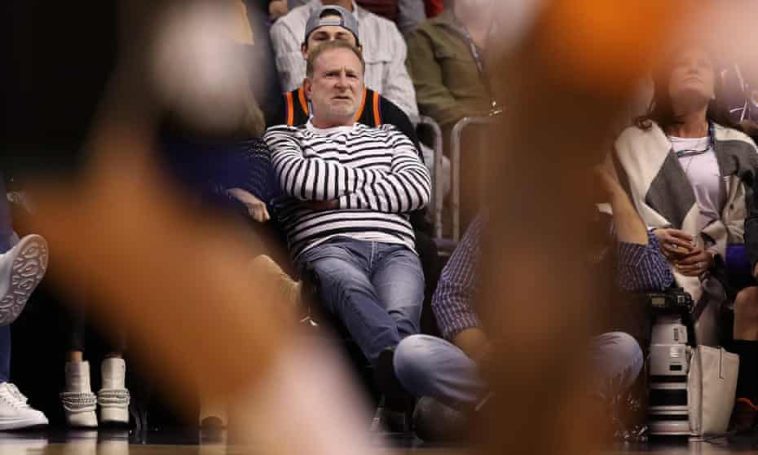 Donald Sterling was banned from the NBA for life. What the Suns’ Robert Sarver did was worse, but earned him a slap on the wrist. The league simply must do better

Amid the backlash to what many interpreted as an inadequate punishment and a slap on the wrist for Phoenix Suns governor Robert Sarver, NBA commissioner Adam Silver held a news conference Wednesday to explain how he and the league’s Board of Governors came to their decision. Many were left wondering if a one-year suspension and a $10m fine for a billionaire practically equated to about $100, a vacation and being able to return as if nothing happened. Many felt that Sarver, who also controls the WNBA’s Phoenix Mercury, didn’t need a timeout, but instead should have received the same fate as Donald Sterling, the disgraced former Los Angeles Clippers governor who was banned from the NBA for life.

While Silver did describe Sarver’s behavior as “indefensible” and formally apologized to the current and former employees who were the victims of Sarver’s workplace misconduct, he also maintained that Sarver’s pattern of incidents were completely different than the Donald Sterling situation and therefore weren’t comparable.

“The situations were dramatically different,” Silver told reporters. “I think what we saw in the case of Donald Sterling was blatant racist conduct directed at a select group of people. While it’s difficult to know what is in someone’s heart or in their mind, we heard those words and then there was a follow-up from the league office and that became public as well in terms of what Mr Sterling even subsequently said about his actions.

“In the case of Robert Sarver, we’re looking at the totality of circumstances over an 18-year period in which he’s owned these teams. Ultimately, I made a judgment that in the circumstances in which he had used that language and that behavior while, as I said it was indefensible, it’s not strong enough. It’s beyond the pale in every possible way to use language and behave that way, but that it was wholly of a different kind than what we saw in that earlier case.”

Sarver has also taken issue with being compared to Sterling, telling the Arizona Republic: “It’s hard to even dignify those comparisons with a response. There is no comparison at all. I have a 40-year-long track record of advocating for inclusion in hiring and promoting minorities and women, and I have devoted my time and resources to fighting for equality and supporting underserved communities. I’m proud of the Suns organization’s record on these issues. Up until this ESPN story, there has never been any claim or mention of me being racist or sexist. It’s just not who I am. My long-time business partners, co-workers, friends, and family will tell you the same.”

I think it’s worth taking a moment to revisit the details of the two cases, just to refresh everyone’s memory.

Sterling, during his tenure as governor of the LA Clippers, set arecord for the largest monetary payment ever obtained by the US justice department in a settlement of a case of housing discrimination. Sterling agreed to pay $2.75m to settle allegations that he discriminated against Blacks and Hispanics at various apartment buildings he controlled in LA. But that’s not why the NBA sent him packing for life.

Sterling lost the Clippers after he was caught on tape complaining to his mistress, V Stiviano, about posting pictures on Instagram with Black people and proclaiming that he didn’t want her bringing any Black people to Clippers games, namely Magic Johnson. One the recordings, he came off like a jealous man who obviously had some type of complex toward Black men. This falls in line with what former Clippers player Quentin Richardson told me on my podcast The Rematch.

“He would parade into the locker room after the games with his entourage and we would be half-dressed, coming in and out of the showers,” Richardson told me. ”He would say, ‘Look at my (Black) players, look at their bodies,” in a description that sounded like a sick infatuation straight out of Jordan Peele’s Get Out.

Once the audio of Sterling recorded by Stiviano became public, Silver conducted an investigation and swiftly banned Sterling from the league for life in addition to a $2.5m fine.

Silver called a press conference and boldly looked into the camera and proclaimed: “Effective immediately, I am banning Mr. Sterling … for life.”

Many were expecting that same energy with Robert Sarver. That same zero-tolerance response to racism, bigotry, hate and misogyny. The same proclamation that “sentiments of this kind were contrary to the inclusion and respect that form the foundation of our diverse, multi-cultural and multi-ethnic league”. The same boldness, empowered posture and definitive stance.

But instead the NBA world watched as Silver appeared to make excuses for Sarver and his seemingly light punishment while simultaneously voicing his remorse for the entire situation as if his hands were completely tied.

Back to Top
Close
X
Taiwo Awoniyi: Lost in the Forest? FeaturedAfter his exploits with the Golden Eaglets of Nigeria at the 2013 U-17 World Cup, he was seen as one of the youngest talents in world football, which …

If the NBA is serious about living its values, then Robert Sarver has to go