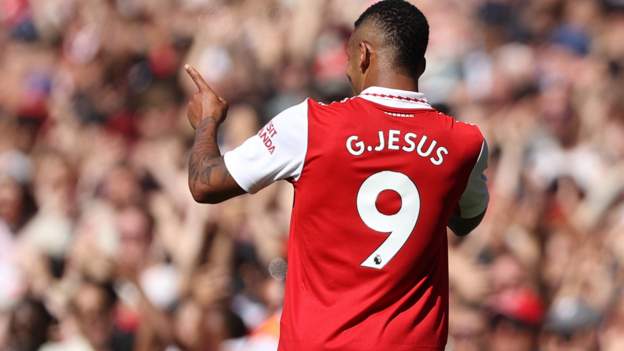 Gabriel Jesus was brought to Arsenal to get them back into the Champions League after a six-year absence – and early signs suggest he is relishing the chance to be first choice rather than second fiddle.

The striker, 25, performed admirably in a star-studded squad in his six years at Manchester City, but the arrival of Erling Haaland prompted a move. Arsenal’s former City coach Mikel Arteta needed a point man at Emirates Stadium, and Jesus looks to have grabbed the chance with both hands.

It’s early days, but two goals and two assists on his home debut – a 4-2 win over Leicester City – and a rapturous reception from Arsenal’s home fans suggest that the Brazilian is a good fit for his new club.

Ex-Arsenal defender Martin Keown told BBC’s Final Score: “He is an outstanding signing, taking Arsenal to another level. The Arsenal saviour – he looks different class. He had to move from Manchester City to do this but he has really put his marker down.”

‘Time to be the main man’

Taking the number nine shirt confirms that the ex-Palmeiras striker is the focal point for Arteta’s plans, with former Gunner Kevin Campbell pointing out: “Arteta has worked with him. He knows what type of player he is. Haaland will be the main man at City, so it’s time for Jesus to be the main man somewhere else.”

And speaking on BBC Radio 5 Live during Jesus’ match winning performance against Leicester, ex-City midfielder Michael Brown echoed Campbell by saying: “He could be a real hit at the Emirates. Jesus has wanted to be the main player and he’s now full of confidence.”

Pep Guardiola is renowned for shuffling his pack at City, but Jesus was frequently picked for the biggest games and repaid his manager with some excellent returns.

He lost just 19 of the 121 top-flight matches in which he appeared for Guardiola, with a 76% win rate. Jesus assisted eight league goals for City in 2021-22, the joint-most of any player at the club, along with Kevin de Bruyne, and indeed the touches he made to set up Granit Xhaka and Gabriel Martinelli against Leicester show that there is more to him than just goals.

Former Manchester City defender Micah Richards told BBC Match of the Day: “He was sensational. Everything he did was brilliant. He seems a different player at Arsenal than he was at Man City, he seems more confident.

“I am happy for him, It feels like he is the main man now at Arsenal.”

Arteta saw Jesus at close quarters during his spell as part of Guardiola’s coaching team at City, and already sees the striker setting the standards that Arsenal need if they are to finish in the top four for the time since 2016.

“He scored two assists too and he’s feeling disappointed in that dressing room because he said he could have scored four,” Arteta said.

“That’s the standard, that’s the mentality you want. To go to a different level, you need that mentality.

“He lifts the standards. The way every day he’s training, the way he’s talking today, the way they are connecting…

How Jesus is lifting standards at Arsenal