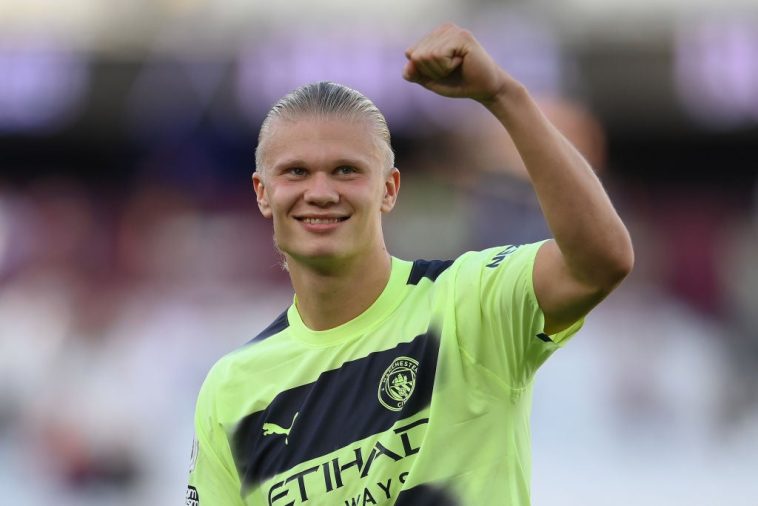 While Erling Haaland was swearing on live television, and Pep Guardiola was getting a little passive aggressive, David Moyes was becoming defensive.

The West Ham manager had been speaking about how his side had been preparing for the Norwegian’s runs all week. They had watched his game against Liverpool, and tried to apply the lessons from previous games against Manchester City.

Moyes was a little unwilling to go all in on all the gushing praise for Haaland, though.

He first of all said that his team should have cut out the Kevin De Bruyne pass that led to the new signing’s sublime second goal. He then refused to admit that the main difference was Haaland.

Moyes spoke at length about how City’s biggest change was actually how high the wing backs – Joao Cancelo and Kyle Walker – played, which rendered much of West Ham’s pre-game preparation irrelevant.

As Guardiola might say in his own more serene moments, though, that’s all just part of the whole. City were clearly able to play that way – or willing to – because Haaland allows a different shape to the team. Rather than the team being smoothly bordered in terms of the formation and how it moves – a flow of passes – the Norwegian’s runs allow jagged angles, that can stretch opposition sides in an instant. This is why the wing-backs pushing up so high, to also create more space for De Bruyne in the centre, is so influential.

There’s a wider point to that, too.

It means that, for a team that have dominated the Premier League with four of the last five titles, they are now a new proposition. The manner of Haaland’s second goal, which actually shared some characteristics with the move that led to the penalty, emphasised that team’s are going to have to work them out all over again.

That might be ominous. The first half of the season might well be Haaland repeatedly exposing defences that are not used to handling him.

Then, even worse, once they have the 17 games of evidence to pore over, the World Cup will happen to allow the Norwegian five weeks of rest and recuperation. He may well return for Christmas as an even different prospect, fully used to the league, and far fresher than most of the competition…

X
Polar bear mauls tourist 'after wandering onto campsite in search of food…UncategorizedDaily StarA tourist was left injured after she was mauled by a polar bear that found itself on her group's campsite on an Arctic Norwegian island.The …