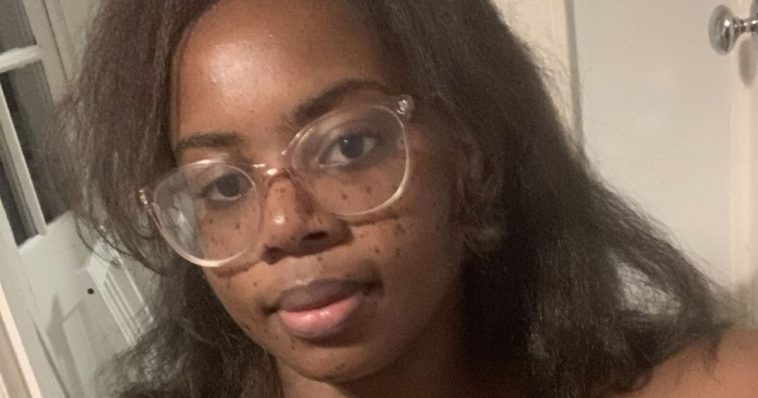 A woman with size 34K breasts that ‘won’t stop growing’ is desperate to raise £15,000 for a boob reduction as she is constantly ‘knocking things over’.

Not only that, Araba Banson, who is an art gallery curator, says her heavy chest sees her regularly bedridden and struggling to breathe. The 24-year-old has to fork out £120 every two months on special sturdy bras to accommodate her expanding breasts and says the only relief she gets is at night when she’s able to heave them to one side. Araba, who didn’t wear a bra until she was 19 when her breasts ‘suddenly grew’, also experiences painful rashes and spots.

After allegedly being repeatedly turned away by doctors who tell her to lose weight before she can have any NHS surgery, 15-stone Araba almost gave up on her breast reduction dreams. But 5ft 7 Araba, who previously loved playing sports, said the final straw was when she went on a rowing machine at the gym in May and couldn’t move her legs due to suffering slipped discs in her back.

Temporarily stuck in a wheelchair and fearful that her mobility would be further compromised in future, Araba launched a fundraising page in the hope of getting the operation done privately.

Araba, from Battersea, south west London, said: “I didn’t always have large breasts, they started growing randomly when I was 19.

“One day I woke up and my boobs just kept growing. [Before then] I didn’t even wear a bra.

“My first bra was a D cup. They just started growing very rapidly and they’ve been growing ever since.

“This [started] when I went to university so throughout this whole time I’ve just been having problems with my back, which has been very frustrating…

Back to Top
Close
X
Queen's snub of Meghan Markle on her 41st birthday is 'notable', says expert…UncategorizedMirrorThe Queen has appeared to snub Meghan Markle by staying silent and failing to send her public birthday wishes.Meghan turned 41 yesterday and is …

X
Source of River Thames ‘dries up’ as hosepipe ban looms for London…UncategorizedStandardThe source of the River Thames has “dried up” due to the prolonged period of warm weather, experts have said.Amid intense drought across the c…