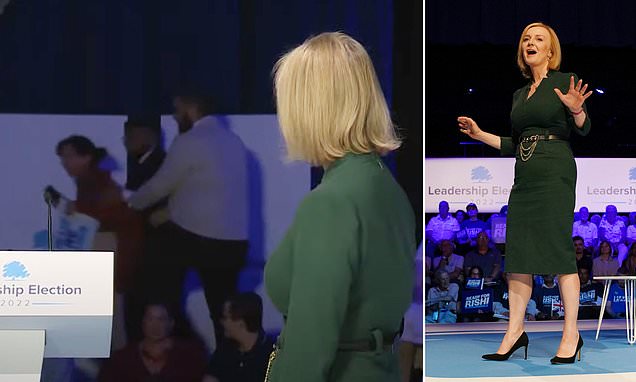 Liz Truss was left fuming by eco-protesters who stormed tonight’s Tory leadership hustings in Eastbourne before being removed by security.

The Foreign Secretary snapped back at the eco-warriors who could be heard shouting ‘shame’ and calling for a Green New Deal to be implemented by a new Prime Minister.

Five protesters were kicked out of the Tory leadership hustings in Eastbourne after shouting ‘shame on you’ to Liz Truss, calling for a ‘Green New Deal’ and claiming to be the majority. Tory members in the audience could be heard chanting ‘out, out, out!’

Ms Truss said that she would legislate to stop the likes of these protesters and vowed to clamp down on them immediately if she wins the leadership.

Back to Top
Close
X
Archie Battersbee: Family refused permission for hospice move…UncategorizedBBCThe family of 12-year-old Archie Battersbee cannot move him to a hospice for withdrawal of treatment, a High Court judge has ruled.His family appli…

X
British girl, seven, is killed in horror speedboat crash in Albania…UncategorizedThis is the moment a distraught father who had just watched his daughter killed by a speedboat propeller brawled with the man now accused over her dea…