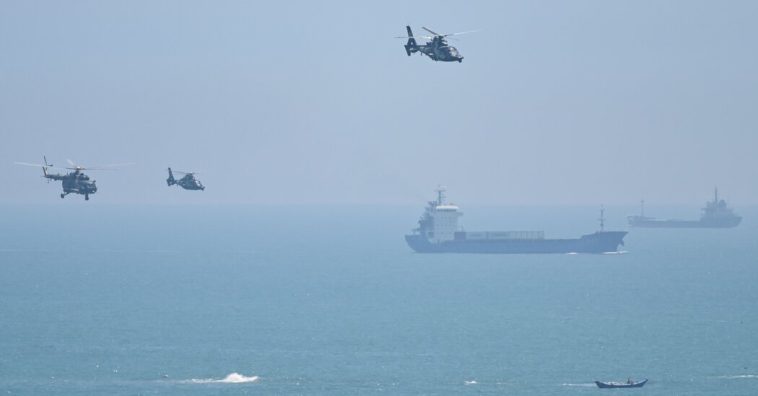 The six zones were chosen for their importance in a potential campaign to seal off Taiwan and thwart foreign intervention, Major General Meng Xiangqing, a professor of strategy at the National Defense University in Beijing, said in an interview on Chinese state television. One zone covers the narrowest part of the Taiwan Strait. Others could be used to block a major port or attack three of Taiwan’s main military bases, he said.

The zone near Kaohsiung in southern Taiwan, where there are crucial bases, “creates conditions to bolt the door and beat the dog,” said General Meng, using a Chinese saying that refers to blocking an enemy’s escape route…

“They’re definitely going to use this as an excuse to do something that helps them prepare for a possible invasion,” said Oriana Skylar Mastro, a fellow at the Freeman Spogli Institute for International Studies at Stanford University who studies China’s military and its potential to attack Taiwan.

“It’s not just about the messaging,” she said. “Under the guise of signaling, they’re trying to basically test their ability to conduct complex maneuvers that are necessary for an amphibious assault on Taiwan.”

Back to Top
Close
X
Zelensky seeks talks with China’s Xi to help end Russia’s invasion of Ukraine…UncategorizedSCMPUkraine is seeking an opportunity to speak “directly” with China about its ongoing war with Russia, President Volodymyr Zelensky has said, noting …

Chinese missiles strike seas off Taiwan, and some land near Japan

X
This is the phase of the pandemic where life returns to noormal…UncategorizedTimeIt is not news that applies to the elderly, immunodeficient, or people with specific comorbidities. The vulnerable have a far more serious risk pr…