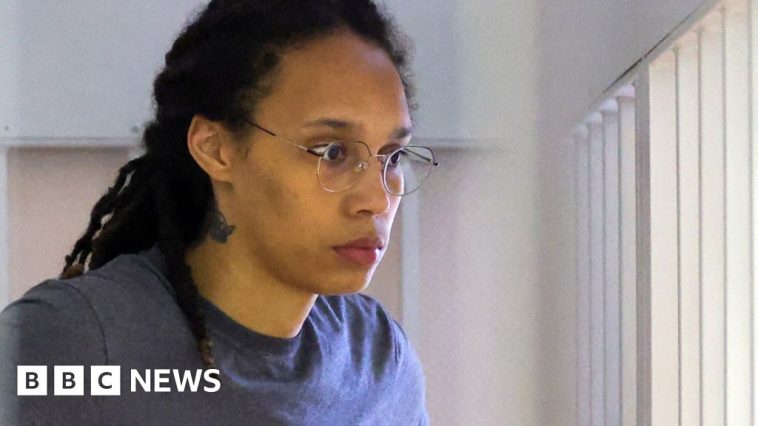 A Russian court has sentenced US basketball star Brittney Griner to nine years in prison on drug charges.

Griner, 31, admitted possessing cannabis oil but told the court she made an “honest mistake”.

But the court convicted her of smuggling and possessing narcotics, and gave her close to the maximum sentence recommended by prosecutors.

Griner is a double Olympic gold medallist and is considered one of the best players in the world.

She was detained in February at an airport near Moscow when vape cartridges containing cannabis oil were found in her luggage. She had come to Russia to play club basketball during the US off-season.

Soon after, Russia invaded Ukraine and her case has become subject to high profile diplomacy between the US and Russia.

Meanwhile, US Secretary of State Antony Blinken said: “Russia, and any country engaging in wrongful detention, represents a threat to the safety of everyone travelling, working, and living abroad.”

As Griner was being led out of the courtroom in handcuffs, Reuters news agency quoted her as saying: “I love my family.”

It is unclear how long she will actually spend behind bars, as the US and Russia have been discussing a potential prisoner swap that could involve the basketball player.

Reports in US media suggest imprisoned Russian arms trafficker Viktor Bout – known as the Merchant of Death – could be transferred by Washington to the Russian authorities as part of the deal.

Griner’s defence team said they would appeal against Thursday’s verdict by the court in Khimki, near Moscow.

Reading the verdict, the presiding judge in Khimki said she took into account the fact that the American had already spent a considerable time in detention.

Earlier, Griner told the court after both sides presented closing arguments: “I made an honest mistake, and I hope in your ruling it does not end my life.”

Back to Top
Close
X
Forrest Gump gets Bollywood treatmentUncategorizedThe American film Forrest Gump won Oscars and has been hailed by many as a classic piece of cinema since its release in 1994.Now an Indian version sta…