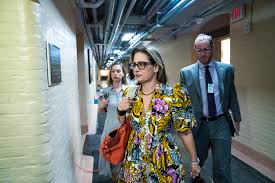 Publicly, Sinema has said nothing about the measure, and her aides maintain she is still reviewing it. Behind the scenes, though, the senator has spoken with Democrats about at least two of the proposal’s tax provisions, according to two people familiar with the matter who spoke on the condition of anonymity to describe the sensitive negotiations.

The first involves tightening a policy that benefits hedge fund, private equity and real estate managers by taxing much of their compensation at a lower rate than most other earned income. The second sets a minimum tax on large, profitable companies that pay nothing to the U.S. government. On both, Sinema’s exact requests are unclear, though she previously has expressed some openness to a minimum corporate tax. The people familiar with the talks cautioned that discussions are fluid.

The two proposals — along with other cost-cutting and revenue-raising components of the bill — together are expected to generate about $739 billion in new federal funds. The amount is enough to offset Democrats’ new spending on health care and climate, while still generating about $300 billion that can pay down the deficit over the next decade.

But resolving Sinema’s concerns could require party leaders to thread a narrow needle, as they labor to preserve a delicate deal that has satisfied Manchin and his fellow Democrats at a moment when some in the party share competing views about how best to respond to an economy facing major price spikes and other significant challenges. Republicans, meanwhile, vehemently oppose the bill, and many approached Sinema directly on the Senate floor late into Tuesday.

Back to Top
Close
X
China rattles a much bigger Saber as it prepares live-fire drills around Taiwan…UncategorizedWSJThe People’s Liberation Army said naval, aerial, strategic-missile and other forces conducted joint training on Wednesday to the north, southwest a…

X
Here’s how abortion rights supporters won in conservative Kansas.…UncategorizedNew York TimesAbortion opponents underperformed even in conservative areas.Going into Election Day, many observers believed the outcome of the referen…