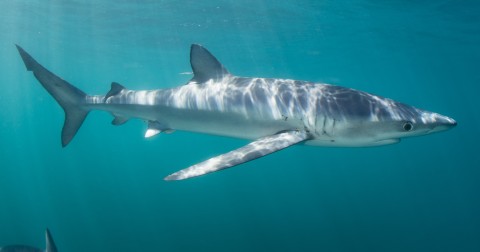 A swimmer has been bitten by a shark while snorkelling off the coast of Britain, in what is thought to be the first attack of its kind in 175 years.

The woman is believed to have suffered a leg injury during a trip to see blue sharks last Thursday off the Cornish coast, near Penzance.

HM Coastguard said it sent a rescue team after the alarm was raised at around 12.30pm.

Rescuers then saved a snorkeler who had suffered a suspected shark bite to the leg.

‘The coastguard team met the casualty at Penzance harbour to assist with passing them into the care of the ambulance service,’ the service added.

In 2017 surfer Rich Thomson was apparently bitten on the thumb by a smooth hound – a relative of sharks.

Several species of shark visit the waters off Cornwall every year, including blue sharks, porbeagle sharks and basking sharks.

None of these species are considered dangerous, though there have been a total of four fatal blue shark attacks worldwide since records began.

The last recorded unprovoked ‘attack’ was at Felixtowe when a windsurfer’s board was bitten by a shark in 2016.

Despite this, the windsurfer sustained no injures and shark bites tend to only happen when provoked during fishing or other activities…

Woman bitten by shark while snorkelling off coast of Cornwall