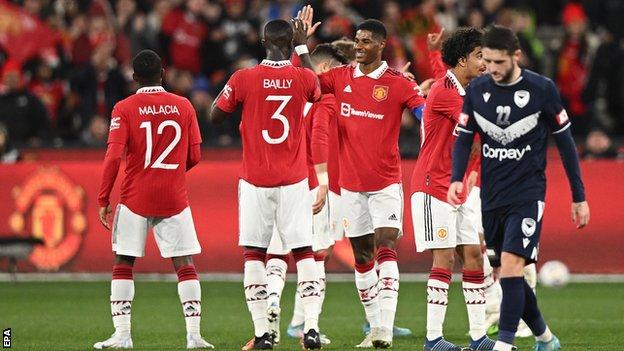 Plus: Tammy Abraham says he is settled at Roma and in no rush to go back to Chelsea; Barcelona president Joan Laporta has left the door open for a move for Manchester City ace Bernardo Silva; Arsenal goalkeeper Bernd Leno is poised to join Fulham

Manchester United are looking to ship six of their out-of-favour defenders before the transfer window closes in one month as new boss Erik ten Hag continues rebuilding his squad, with Sevilla interested in Alex Telles and Phil Jones in talks with DC United.

Premier League stars want to stop taking the knee before every game following a meeting of the 20 club captains last Thursday, amid rising concerns that the gesture has lost its gravitas.

Kasper Schmeichel is closing on his move to Nice and is expected to undergo a medical over the next 48 hours after getting the blessing of manager Brendan Rodgers to seek a new challenge.

Cristiano Ronaldo has been accused of setting a bad example after leaving Old Trafford before the end of Sunday’s friendly with Rayo Vallecano, according to a Manchester United insider.

Barcelona president Joan Laporta has left the door open for a move for Manchester City ace Bernardo Silva later this month, after they sold 25 per cent of their TV studios to crytpocurrency firm Socios.com for £85m to help register new signings.

Eric Bailly is set to snub a reunion with Jose Mourinho at Roma in favour of Sevilla.

Tammy Abraham says he is settled at Roma and in no rush to go back to Chelsea.

The new Prime Minister will try to bring the Women’s World Cup to the UK following England’s European Championship triumph.

The Hundred will use extra stewards and additional cameras to clamp down on antisocial behaviour at matches.

The Rugby Football Union’s move to ban trans women has caused its own diversity and inclusion representatives to resign their positions over the weekend.

IPL franchises hope to contract players for 12 months a year to play across a range of teams, Venky Mysore, the chief executive of Indian Premier League side Kolkata Knight Riders, has revealed.

Arsenal are close to selling Lucas Torreira to Galatasaray and complete his long-awaited departure from the club, finally drawing to a close an error-strewn £129m spending spree.

Idrissa Gana Gueye is close to rejoining Everton from Paris Saint-Germain. The midfielder has travelled to Merseyside for a medical in anticipation of completing the deal as the clubs negotiate the final details.

Arsenal goalkeeper Bernd Leno is poised to join Fulham after the clubs reached an agreement and personal terms were settled.

The SRU has offered a partial apology to the family of Siobhan Cattigan, the former Scotland forward who died last November, after her parents accused them of failing to provide sufficient medical or pastoral care after two serious concussion incidents.

Bemused David Martindale is adamant there’s no split loyalties when his Livingston team face Rangers – and insists he’s “choking” to take points off the Ibrox side.